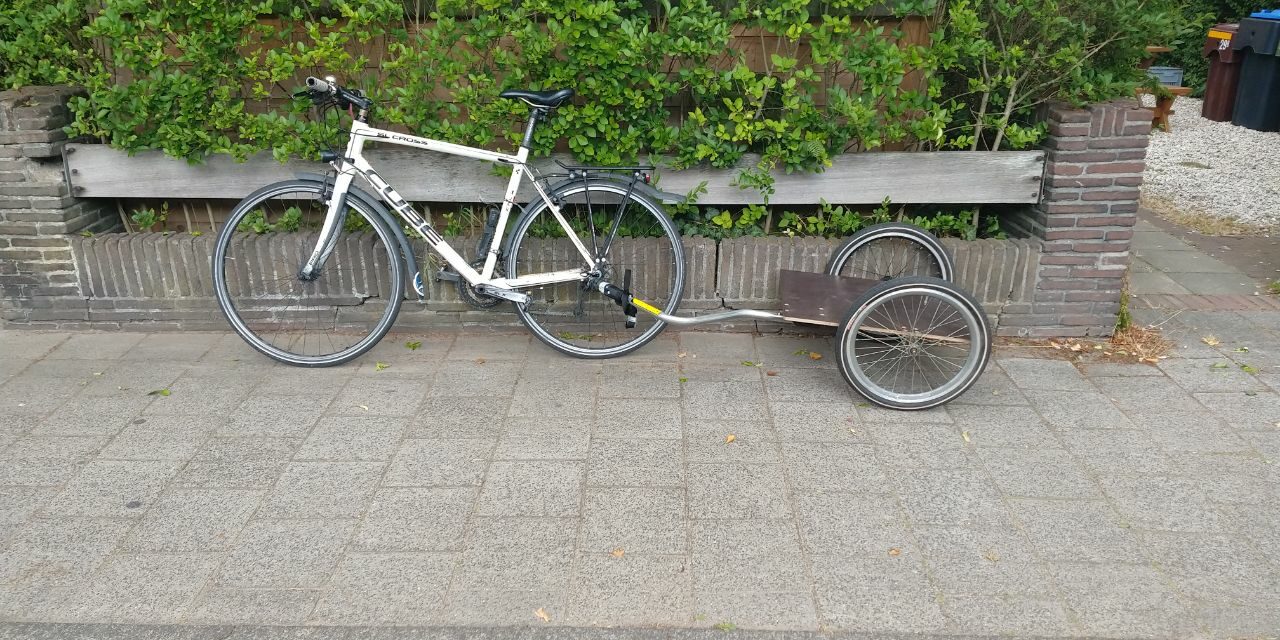 As we all know, cycling is the best way to get around in Leiden in many regards. But what if there’s a lot of stuff that has to be transported and a Bakfiets is just not available or suitable for you? In this case a bicycle trailer is a great alternative. Here I document the build of a trailer during this summer.

The build begins with a 12 mm thick piece of Betonplex that was a leftover from a different project. For a smoother experience I rounded off the corners with the CNC router, which is absolutely not necessary but I just recently learned how to use it so it was very exciting. Afterwards holes were drilled according the DIY drawing at https://www.hinterher.com/downloads, which was also the main source of inspiration for the trailer’s design.

On Marktplaats I found two old 20″ wheels, once used as front wheels of a kids bicycle which I wanted to further utilize for the trailer. Making use of the metal bandsaw, the angle grinder and the TIG welder, a bracket was fabricated that connects the wheels to the trailer. I know it looks a bit odd but it wasn’t that easy to fit all the screws into the limited space still being able to get a grip on them with a wrench.

Since the kids bicycle wheels were meant to be attached two sided to a fork, this one sided approach was let’s say a little experimental, but it turned out to be quite stable. I wasn’t planning to transport a human being with the trailer anyways. For the drawbar I decided to buy something of the shelf, together with a nice coupling and I decided to go with a drawbar from https://www.hinterher.com which I knew was really worth the money. Screwing together all the parts left me with a fairly cheap and very functional bicycle trailer that I never ever want to miss again. In terms of stability I can tell that I was able to transport three full crates of beer (roughly 30 kg) without any issue. Cheers!